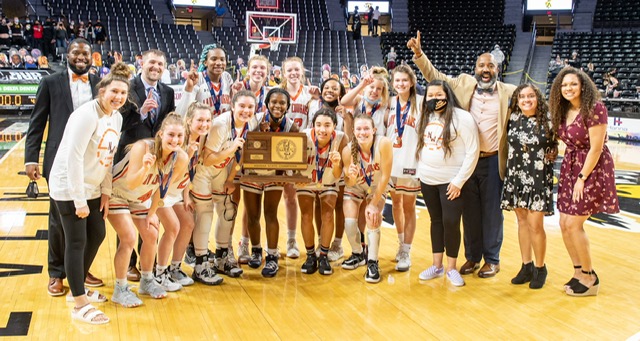 Shawnee Mission Northwest Lady Cougars capped a perfect season when they defeated the Topeka Trojans 61-54 to claim the 6A Kansas Girls State Basketball Championship.  The Lady Cougars, who finished the season at 23-0, earned the first State Championship for girls’ basketball in school history.

SMNW, behind a loud and supportive fan based, went toe-to-toe with the highly touted Trojans, who were 23-1 entering tonight’s contest.  The Lady Cougars fell behind early 7-2, but clawed their way back into the game to trail 15-14 at the end of the first quarter.  Behind some solid defense the Lady Cougars held Topeka to six points in the second quarter to take a five point lead, 26-21, into halftime.

The second half was much the same as the first, with both teams exchanging their best punches.  Yet, the solid defensive effort by the entire Lady Cougars squad along with the penetration of Sage Grampsas, who had a game high 25 points, allowed SMNW to maintain their lead.  Down the stretch key free throws by the Lady Cougars allowed them to close out the game.

In addition to Grampsas’ 25 points, Kennedy Taylor had 15 points, including a perfect 4-4 from the freethrow line.  Tamara Harris-Webster banged in seven points, Kylie Dunn and Ella Mackewicz each had five and Ericka Ojeda drained a three point shot for her only points. 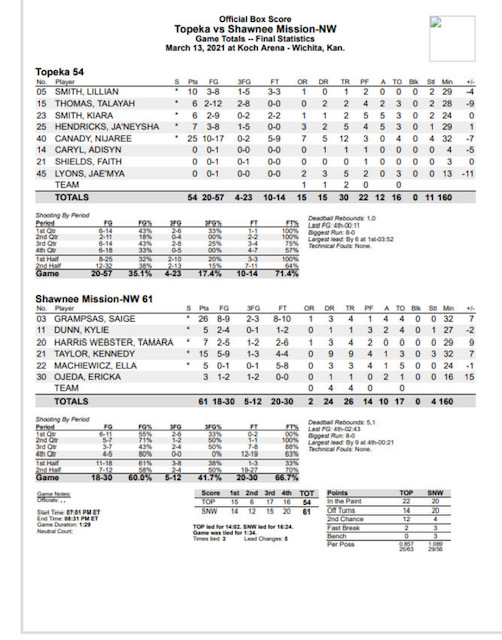