Congratulations to Dakota Stephens who rolled a 704 series and was crowned SM District Champion amongst individuals in boys’ bowling.  Stephens who series was highlighted with a 275 in his first game.  He came out and rolled strikes on his first nine frames prior to settling for the 275.

Stephens along with teammate Tyler Gochenour, who rolled a 613 series and finished fourth overall individually, helped the Cougars to a runner up finish in the SM District Cup standings; just 14 pins behind SMW who were crowned champions. 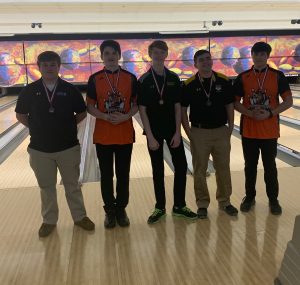